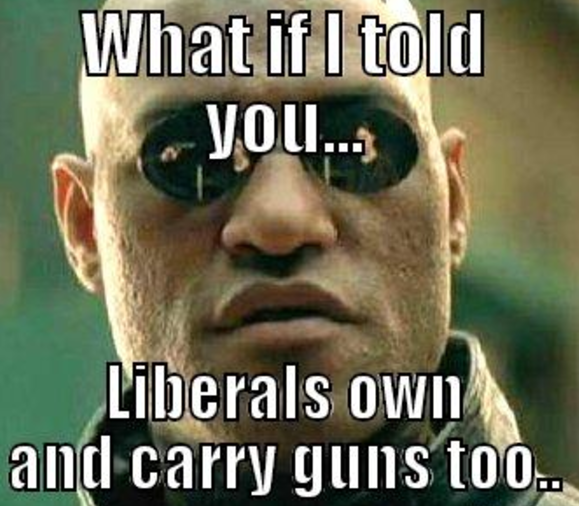 Terrorists and Extremists as it relates to Gun Ownership, What do people really do after an attack?

Shootings and other acts of violence that involve guns would typical lead to a conversation about how guns are bad and we need to have them taken away and it’s the guns fault.  Liberal friends would shout from rooftops about how they are dangerous and acts like these are exactly why, and because they are so passionately anti-gun they would throw their weapons (if they have any) in the river, or take them to the local police department…wouldn’t want to pollute the river.  Individuals on the fence about it, who don’t won guns would likely cheer on the liberals and get on the “guns are bad” team.  Lets see what the truth is here…

Background:Mass shootings are common in the United States. They are the most visible form of firearm violence. Their effect on personal decisions to purchase firearms is not well-understood.
Objective:To determine changes in handgun acquisition patterns after the mass shootings in Newtown, Connecticut, in 2012 and San Bernardino, California, in 2015.
Design:Time-series analysis using seasonal autoregressive integrated moving-average (SARIMA) models.
Setting:California.
Population:Adults who acquired handguns between 2007 and 2016.
Measurements:Excess handgun acquisitions (defined as the difference between actual and expected acquisitions) in the 6-week and 12-week periods after each shooting, overall and within subgroups of acquirers.
Results:In the 6 weeks after the Newtown and San Bernardino shootings, there were 25 705 (95% prediction interval, 17 411 to 32 788) and 27 413 (prediction interval, 15 188 to 37 734) excess acquisitions, respectively, representing increases of 53% (95% CI, 30% to 80%) and 41% (CI, 19% to 68%) over expected volume. Large increases in acquisitions occurred among white and Hispanic persons, but not among black persons, and among persons with no record of having previously acquired a handgun. After the San Bernardino shootings, acquisition rates increased by 85% among residents of that city and adjacent neighborhoods, compared with 35% elsewhere in California. Limitations:The data relate to handguns in 1 state. The statistical analysis cannot establish causality.
Conclusion:Large increases in handgun acquisitions occurred after these 2 mass shootings. The spikes were short-lived and accounted for less than 10% of annual handgun acquisitions statewide. Further research should examine whether repeated shocks of this kind lead to substantial increases in the prevalence of firearm ownership.
Primary Funding Source:None.

My first thought is why are these shooters not stopped for having un-compliant weapons and high cap mags???  It seems the criminals don’t bother complying to all the wild California laws like they are supposed to…go figure.

The sales numbers can’t lie, it seems that our liberal gunless friends are scrambling to get their own guns after incidents like this, to protect them selves.  It would seem that despite the loud liberal public views against guns, they are making personal choices to protect them selves privately and continue to wage war on guns publicly…why is this not surprising?

I think it’s a real possibility that with these tragic events, comes an awakening to anti-gun Americans, that they need to arm them selves for their own protection.  This also gives them the ability to protect others against those that intend to do us harm in the future.  There are plenty more stories of guns saving lives by stooping would be terrorists, shooters and attackers than the media would have you believe and more conscious responsible gun owners is something we need badly.

Here at Cross Armory, we are pro guns and we support and welcome all those who chose to change their anti-gun views get behind the second amendment and freedom fighting Americans everywhere in order to protect what maters!